With all this Royal Wedding hoopla, I can’t help but wonder why everyone, including me, is so intrigued by this story. I have no ties to Britain, am not particularly interested in weddings, yet I am interested in Kate & Will’s wedding. I honestly think it has something to do with the fairy tale stories that we are fed as children. We all know the Disney movies I’m referencing: Cinderella, Snow White, Sleeping Beauty, The Little Mermaid.

Take your pick of the lot. There’s a similar story to each of them. An exciting tale of a damsel falling in love with a dashing prince who rescues her from her plight. They marry. They live happily ever after. Interestingly enough, the movie never goes beyond the wedding to show you the happily ever after part. I think there’s two reasons that might be. The first and most likely – the ever after wasn’t so happy after all, at least not in the fairy tale sort of way they want you to think. The second, no would watch it. Is it a calm, happy story that they show us pre-wedding in any of those movies? NO! It’s a dramatic story of terror, evil, fighting, humor, death… and that’s exactly what draws us in. Without all the excitement, who would watch? There’s only one “fairytale” story that’s continued on to show us life after marriage: Shrek. If you’ve ever seen the sequels, you know the marriage picture they show is far from the picturesque happily ever after ending, and that’s why we we like it. 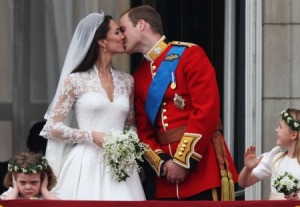 Overall, I think it’s the fact that Kate is an everyday woman, like you and me, that makes us more enthralled with this story. Sure we’d likely still be interested, but there’s a connection that us non-aristocratic girls feel to a “commoner” like Kate. We all have some deep down desire to be rescued by a prince and have the royal wedding, but the reality is that the ever after of the fairy tale wedding, often isn’t so happy. I think every royal wedding since the Queen’s has ended in divorce. Maybe ever after isn’t so happy after all. Let’s pray Kate & Will’s does not follow suit.

www.MyMarriageInMotion.com Interactive media evangelist at Vanderbilt University Medical Center that truly loves life, loves God and loves others. Wife to Casey. Owner of Minny. Aunt to 11. Advocate of transparency. (Opinions my own)
View all posts by Shana Bresnahan →
This entry was posted in Culture, Wedding and tagged ever after, fairytale, happily ever after, kate middleton, marriage, romance, royal wedding, wedding. Bookmark the permalink.

1 Response to Happily Ever After